Arnold L. Fisher
As a member of one of America’s philanthropic and patriotic families who direct most of their charitable work to the men and woman of the United States Military, Arnold Fisher has overseen numerous charitable projects. Most of his dedicated work was through The Intrepid Fallen Hero’s Fund. After recognizing the need to provide specialized rehabilitation services to veterans who are traumatic amputee and burn patients, Mr. Fisher became the driving force behind private donations to build the Center for the Intrepid. He has also been hard at work creating a state-of-the art Traumatic Brain Injury (TBI) Diagnostic Center in Bethesda, Maryland. Mr. Fisher entered the United States Army in 1953 and served 18 months in Korea. 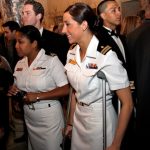